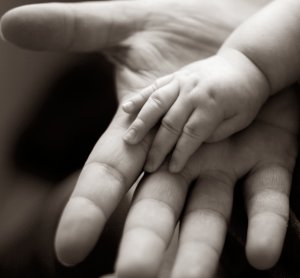 No and yes. In order to reply to this question we have to go back a little to understand how human beings are made and what our adaptive capacities are.

Human beings are primates and as such we are eminently social animals that need to have strong bonds. The first of these bonds is called attachment and it is established with the primary caregiver, generally the mother. In order for a human baby/child to develop in a healthy way it needs to feel it can depend intensely and safely on someone. If this bond is not established, or if it is established in an irregular or uncertain way, the development of a human being will be altered.

Within primates it has been observed that the closer the species is genetically to us the more the need for this kind of bond grows. Ethologists have discovered, for example, that chimpanzees can be brought up by cloth covered wire figure that feeds them with a bottle but bonobos, our closest relative genetically, die if they do not have physical contact with a live caregiver. In 1965 an Austrian-American researcher, René Spitz, published a book, “The First Year of Life”, in which he described a syndrome called hospitalism where orphaned human babies had all their physical needs taken care of (food, shelter, hygiene etc.) but did not have a chance to establish a close bond with someone. These babies often became more and more withdrawn and lifeless and some did not survive.

These are the most extreme cases. In less extreme cases there is a capacity that human beings have that distinguishes them from other primates and that allows them to survive: their extraordinary adaptiveness. Human beings are capable of adapting to many different situations, even highly detrimental ones, in order to survive. It is therefore possible for the first attachment bond to not have been established securely but the child manages to survive because it finds ways to protect itself from the lack and the neediness that result from this.

In general, the ways that it will find to defend itself involves distancing itself from those frustrating relationships in order to protect itself from needing someone that it going to fail in satisfying it. Paradoxically, by doing this, the child protects itself but also deprives itself of exactly what it needs. When it becomes an adult it will need and fear dependency with the same intensity, which will significantly complicate its relationships with other people.

Now we can reply to the initial question. For someone whose attachment/dependency needs have been sufficiently satisfied in his or her childhood beginning psychotherapy or psychoanalysis will not provoke notable dependency. The need for help will not be experienced as distressing and the person will be able to bond with the psychoanalyst trusting that that need will not last longer than necessary.

However, for someone whose attachment/dependency needs have not been sufficiently satisfied beginning psychotherapy or psychoanalysis will often activate the intense need and fear of dependency that infuses all the person’s relationships. It is not that psychoanalysis creates dependency but rather that the therapeutic setting facilitates it appearing in those people for whom it is a central difficulty.

The fact that that need and fear can appear in the therapeutic relationship is actually useful for both the patient and the psychoanalyst because it will allow them to work on it in a very real and direct way as it unfolds and then be able to resolve it.