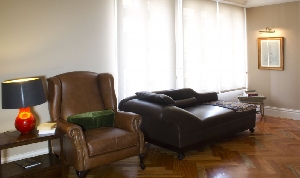 When people ask what psychoanalysis is, they usually want to know about treatment. As a therapy, psychoanalysis is based on the observation that individuals are often unaware of many of the factors that determine their emotions and behavior.

These unconscious factors may create unhappiness, sometimes in the form of recognizable symptoms and at other times as troubling personality traits, difficulties in work or in love relationships, or disturbances in mood and self-esteem. Because these forces are unconscious, the advice of friends and family, the reading of self help books, or even the most determined efforts of will, often fail to provide relief.

Psychoanalytic treatment demonstrates how these unconscious factors affect current relationships and patterns of behavior, traces them back to their historical origins, shows how they have changed and developed over time, and helps the individual to deal better with the realities of adult life.

Analysis is an intimate partnership, in the course of which the patient becomes aware of the underlying sources of his or her difficulties not simply intellectually, but emotionally—by re-experiencing them within the safe framework of an analysis with the analyst. Typically, the patient comes three, four or five times a week, lies on a couch, and attempts to say everything that comes to mind.

These conditions create the analytic setting, which permits the emergence of aspects of the mind not easily accessible to other methods of observation. As the patient speaks, hints of the unconscious sources of current difficulties gradually begin to appear in certain repetitive patterns of speech and behavior, in the subjects that the patient finds hard to talk about, and in the ways the patient relates to the analyst.

The analyst helps elucidate these for the patient, who refines, corrects, rejects, and adds further thoughts and feelings. During the time that an analysis takes place, the patient and the analyst work on how these insights –which often change during the course of an analysis–– are experienced in daily life, in fantasies, and in dreams.

Patient and analyst join in efforts not only to modify crippling life patterns and remove incapacitating symptoms, but also to expand the freedom to work and to love. Eventually the patient's life ––his or her behavior, relationships, sense of self–– changes in deep and abiding ways.

Sigmund Freud was the first psychoanalyst. Many of his insights into the human mind, which seemed so revolutionary at the turn of the century, are now widely accepted by most schools of psychological thought. Although others before and during his time had begun to recognize the role of unconscious mental activity, Freud was the preeminent pioneer in understanding its importance.

Through his extensive work with patients and through his theory building, he showed that factors which influence thought and action exist outside of awareness, that unconscious conflict plays a part in determining both normal and abnormal behavior, and that the past shapes the present.

Although his ideas met with antagonism and resistance, Freud believed deeply in the value of his discoveries and rarely simplified or exaggerated them for the sake of popular acceptance. Building on such ideas and ideals, psychoanalysis has continued to grow and develop as a general theory of human mental functioning, while always maintaining a profound respect for the uniqueness of each individual life.

Ferment, change, and new ideas have enriched the field, and psychoanalytic practice has adapted and expanded. But psychoanalysts today still appreciate the persistent power of the irrational in shaping or limiting human lives, and they therefore remain skeptical of the quick cure, the deceptively easy answer, the trendy or sensationalistic.

Like Freud, they believe that psychoanalysis is the strongest and most sophisticated tool for obtaining further knowledge of the mind, and that by using this knowledge for greater self-awareness, patients free themselves from unnecessary suffering, and improve and deepen human relationships.

Know more about Psychology and Psychotherapy.