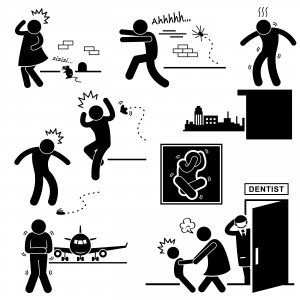 The diagnosis of a phobia is usually fairly clear. A phobia is any irrational fear of objects, animals, situations or spaces that are not objectively dangerous.

Phobias are a very effective way for the psychic apparatus to get rid of the inner anxiety from which the subject suffers. Instead of feeling that the anxiety and the danger are within, the phobia allows the subject to locate the source of anxiety outside, where it can be avoided.

For instance: an individual who is very afraid of her own aggressiveness may develop a phobia of dogs (onto which she can attribute the idea of aggressiveness). Then she can avoid dogs and, by doing so, be free of anxiety. The fear of herself has become the fear of something else that can be avoided. Needless to say, all of this happens unconsciously, there is no conscious intentionality in the creation of a phobic symptom.

Precisely because of the fact that phobias allow the individual to locate the source of danger on the outside, many people can live with their phobias without great difficulties since they simply avoid their phobic object, and thus avoid anxiety.

However, the situation becomes more complicated when avoiding the phobic object starts to severely restrict the individual’s freedom. It is not uncommon in certain cases for phobic objects to multiply, progressively invading and limiting the subject’s life more and more.

It is necessary to differentiate between different types of phobias. A phobia of an object, an animal or of a specific activity indicates a different kind of mental functioning that claustrophobia or agoraphobia. The former are of a much more specific order, where the anxieties at play have more to do with well-defined relational situations. The latter are usually more linked to feeling that one’s self, one’s identity, is threatened, and they are more linked to archaic anxieties in human development. Social phobias are somewhere in the middle, and they are often due to the fact that the subject that suffers from them attributes a very critical part of herself to others.

How is a phobia developed, then?

This may be a little too technical. Going back to our previous example, lets imagine an individual that feels a great deal of anxiety when she becomes aware of her aggressiveness in certain situations. Since she cannot bear the anxiety, she represses the idea of her aggressiveness in order not to be aware of it, and displaces the anxiety it produces onto dogs, that lend themselves well to the idea of oral aggressiveness. Thus dogs are aggressive and make her anxious, not herself, and she can free herself from her anxiety by avoiding dogs.

Although some researchers have suggested hypotheses about the etiology of psychic symptoms, we must accept, for the moment, that we do not know exactly what configuration of internal and external factors leads to the creation of specific symptoms in every case. In some concrete cases it is possible to trace the creation of a symptom back to its origin, but it is not possible to state that all phobias come from the same conjunction of factors.

That said, there are situations that will tend to favour more one kind of pathology than another, more or less severe, and it is certain that serious early trauma significantly increase the risk of severe pathology, but this is not always the case: some subjects are extraordinarily resilient and can organize themselves mentally in situations that would be unbearable for others, and vice-versa. To this we might add that the same traumatic situation (real and/or fantasized) can lead to very different symptoms in different people.

A specifically psychoanalytic treatment of phobias does not exist since a phobia is just a symptom within an extremely complex mental structure. The mental apparatus is not made of neatly separate compartments that one could take out, fix, and put back in without touching anything else. Everything is intricately connected and one can’t exert an influence on one area of the mind without it affecting everything else.

All psychoanalytical treatments, motivated by a phobia or any other symptom, will undertake the exploration ––deep and careful–– of the subject’s entire unconscious personality. As a part of this exploration, in the case of a phobia, the original representation of the phobic affect will be found and little by little they will be able to be linked back together in a safe context where they can be tolerated ––the analytic frame–– and will be worked through in order to be less anxiogenic.

It is important to remember that symptoms are just a small part of the expression of an individual’s personality, and it is probable that through treatment many other areas of the individual’s life change in a beneficial way, as well as symptom relief.