A brief psychology of anxiety 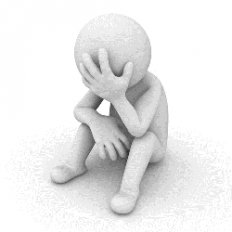 Anxiety is one of the most common symptoms seen by psychologists in Madrid, and everywhere in the world for that matter, along with depression. It has the fundamental function of alerting the person to an emotional danger and can appear in a vast array of different circumstances. It is often accompanied by physiological symptoms such as rapid heartbeat, sweating, muscle tension and insomnia.

It is important not to confuse anxiety with a diagnosis in itself since anxiety is just one manifestation of something much more complex. Anxiety is the emotional equivalent to having a bodily fever: having a fever can be a symptom of a common cold, of an infection or of cancer –– or of everything in between. In much the same way, having anxiety can be a due to a relatively benign examination situation, but it can be also be a result of obsessive doubt or it can be a symptom of schizophrenia, or any number of other things.  Thus, when a patient presents with anxiety, it is vital to see what the entire situation is and to create a hypothesis of what may be causing the anxiety before coming to a diagnosis.

One or two anxieties?

It is interesting to note that at the beginning of the 20th century the creator of psychoanalysis and one of its pioneers ––Freud, then Klein–– postulated, in different ways, the existence of two different kinds of anxiety. Freud’s initial idea of anxiety was that it expressed an excess of unreleased libidinal tension; then he came to think of it as a signal of unconscious emotional danger. As for Klein, she started to think of anxiety as related to the fear of annihilation, of being harmed in some way; she then later conceived of another kind of anxiety that is related to the fear of losing someone/something important.

Roughly 100 years later, neuroscientists such as Panksepp and Yovell have discovered that there are, indeed, two distinct anxiety systems in the brain that have separate neuro-anatomies, are regulated by different neurotransmitters and respond to different psychotropic drugs. They function as warning systems of dissimilar dangers and it is interesting to observe that the fear of being harmed system is older on an evolutionary scale than the fear of losing someone/something system.

Difference between anxiety and fear

From a purely neurobiological point of view it isn’t easy to differentiate between anxiety and fear. From a psychological point of view, however, it is clinically useful to differentiate them along the axes of knowing what the danger is or not. Fear is the result of the perception of a known danger, anxiety is the result of the perception of an unconsciously fantasized danger. You are afraid of falling off a cliff because there is a real danger there, but you can be anxious about social situations in which there is no “real” danger. There are, of course, overlaps between the two, but anxiety is fundamentally the result of feeling an unknown danger in an objectively non-dangerous situation, or not as dangerous as one feels it to be.

To illustrate this, let us develop the simplified example that we’ve already mentioned: the common case of anxiety in social situations. Unless one is in a clearly hostile environment, there is no real externally observable danger to social situations, in principle. Yet an individual may feel anxious –– why? This is because, parallel to the “real” interaction that is physically occurring, there is another hidden interaction taking place in the individual’s mind in which what is happening in external reality triggers a dangerous internal unconscious scenario where something entirely different is going on. So, what on the outside may simply be perceived as meeting someone new, may unconsciously be felt, to give a common example, as crushing pressure to live up to the other person’s enormous expectations, even though the other person in reality exerts no such pressure nor do they have such high expectations. This is just one of the many different inner scenarios that can lead to anxiety in social situations –– the list is long and complex.

The expression of anxiety can range from some localized situations or certain objects, such as in phobias, to a chronic feeling of generalized anxiousness. Anxiety that is localized to certain situations and objects usually results in avoidant behaviour that limits, to varying degrees, the individual’s freedom to go about living his/her life. Chronic anxiety is a source of considerable suffering for those who feel it and indicates a fundamental and constant internal situation of danger that the person is not aware of. To use an architectural metaphor, localized anxiety is as if a beam of the roof or a door on the inside of the house were loose; chronic generalized anxiety is as if the very foundations of the house were not stable, the danger is much greater.

Some consequences of anxiety

Anxiety also has the unfortunate tendency to make us act in a ways that perpetuate the anxiety and often make it worse. It is not uncommon that by trying to get rid of anxiety quickly ––by avoiding anxiety-generating situations; by discharging it through compulsive sex, work or exercise; by self-medicating through alcohol, drugs, food, etc.–– we reduce our capacity to tolerate a certain degree of tension and enter, unwittingly, into an anxiety-generating cycle, or even an anxiety-based avoidant lifestyle, that makes us even more vulnerable and anxious than we initially were when we first started trying to free ourselves from it. It is interesting to note, on this subject (and this will be the subject of a future article), that having continuous access to instant gratification situations, such as those provided by technology, tends to increase the general level of anxiousness.

The psychoanalytical treatment of anxiety is as with any other symptom: one must reach a deep emotional understanding of the dangerous unconscious inner scenario, trace it back to its origins, reveal why it continues to manifest itself and bring it into emotional consciousness every time it appears in the sessions so that it can be worked through and slowly deactivated.

Really thorough article It is great that you mention differences between fear and anxiety. This can help people who are facing the issue for the first time.